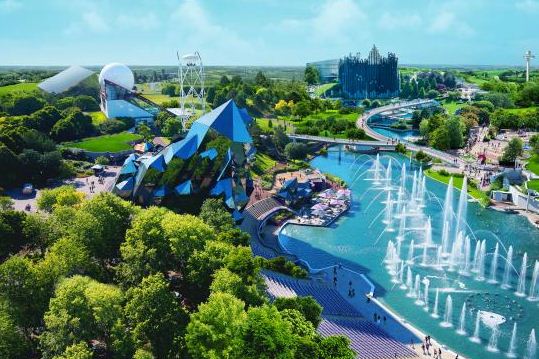 With more than 35 million visitors since it opened in 1987, Futuroscope is the second largest leisure park in France. The enormous images on the 9,700-ft² dome screen take viewers deep into the Louisiana heartland.When the Mississippi was averted, New Orleans was able to reach out into these zones, but doing

so has resulted in huge coastal erosion. The damage to its bayous and wetlands, once natural

hurricane defenses, has been such that New Orleans finds itself at growing danger from cyclones.

young ages about the effect of protecting wetlands and ecosystems.

The paintings on the 6,500-ft² screen in Brush with Genius grant a totally new glance at Van Gogh and his work and the film’s striking graphics are a thrilling adventure to the sources of the artist’s inspiration.

Arthur, the 4D Adventure from Luc Besson (director of The Fifth Element, Leon, and The Big Blue)

takes young visitors into the make-believe world of the Minimoys. The complete collection of vision technologies

the imaginative aptitude is seen in the Minimoys world thrust young guests on a roller coaster ride of excitement and thrills. The Future is Wild New version 2009

Darwin’s theory of evolution projects light on how species evolved in the antiquity and is the incentive for Futuroscope’s imaginative look into tomorrow. Our young guests climb aboard safari vehicles for an interactive augmented-reality venture, where, kitted out with camera-binoculars and sensor bracelets, they will engage and communicate with animals that could be wandering the planet millions of years from now.

This spectacular, immersive and informative show from the American Museum of Natural History,

narrated by Robert Redford, takes young guests on a breathtaking adventure through time and space to

behold the cosmic crashes that shape the world. The scientific pictures are shown on the dome

the screen was taken by NASA satellites and modeled to simulate cosmic phenomena in 3D.

Enjoy the amazing new games in Children’s World; A fun area for children where all the family can

And at the end of the day, the Blue Note Mystery evening show will bring you in a stunning musical

a fairy tale with lasers and special effects….. 230 million years ago, dinosaurs ruled the animal kingdom. Then, suddenly, 65 million years ago they disappeared. In this film, renowned paleontologist Rodolfo Coria takes us back 80 million years, to Patagonia, in the footsteps of the largest dinosaurs to have walked upon the planet.  70 mm film, shown on a 9,700-ft² hemispherical screen. Running time: 25 minutes.

Castle of Giddiness, the amazing world of Moebius

This spectacular romp takes visitors on a dizzying, interactive adventure into the graphics world of the artist Moebius.Spectacular trail of discovery. Running time: 5 minutes.

Futuroscope’s new dynamic-cinema adventure takes thrill fiends on a pulsating snowmobile expedition across the vast, wild expanses of Lapland.  The seats are operated by hydraulic pistons to move in time with the on-screen action.

An open-air exhibition of 76 giant photos, in association with the CNDB (the French wood promotion board) and France Bois Forêt.

The Best of Dynamic Cinema

For 2008, Futuroscope brings visitors looking for an adrenalin high a new selection of dynamic adventures to enjoy on seats that move in time to the images. The seats are operated by hydraulic pistons to move in time with the on-screen action. Running time: 5 minutes.

In 2008, Futuroscope gives kids and their families more of what they want by filling the two hectares of Children’s World with more new fun, creative and sporting activities that will work their minds and bodies.

Budding Drivers, in association with MAIF

Budding Drivers sends youngsters out behind the wheel into the traffic of a futuristic city.

The Daredevils’ Quiz, in association with Smart us

In this new and intelligent games area, children choose a challenge from the screen and off they go, dashing around to win territory, bouncing around on the interactive hopscotch grid in a test of speed and memory, and more!

What kind of strange volcano is this, bursting out of the ground in the middle of Children’s World? The bravest would-be mountaineers must hang on tight as they climb over 20 feet up to the top. Getting down is easy: just slide along the giant tunnel.

Not forgetting… the experiences visitors keep coming back for

One of the biggest crowd pleasers is enjoying a new lease of life! Since 2007, Dynamic Vienne has been dishing out even more special effects…

Journey into the Dark

More than 300,000 visitors have already taken part in Futuroscope’s awareness-raising presentation Journey into the Dark, a fun walk in the dark through a number of specially arranged zones prepared using objects smells and sounds.

The mystery of the Nile

The Nile has exerted a tremendous lure over men for thousands of years. The mystery of the Nile uses a 6,500-ft² IMAX® flat screen to tell the epic journey of a team of explorers

The showpiece attraction devised by Kamel Ouali In the vast, hip-looking ballroom, ten 23-ft-high articulated arms seem to burst from the ground and beckon visitors to take their seats in pairs in the giant palms. The metallic hands then gently close around those who are daring enough to brave this momentous experience.

Star of the Future!

Visitors to Futuroscope can now land the starring role. This attraction lets them get in on the act, whisking them to the heart of the film-set action, giving them the chance to step out in front of the camera in a different type of audition

Treat yourself to our new attractions, if you dare

From the initial, straightforward idea of offering an enjoyable and enriching experience, Futuroscope has nurtured its daring approach and creative spirit to become what it is today: not just a place to visit; a place to share. Futuroscope is

an experience to enjoy with friends and family. Coming here is a chance to recharge the batteries, to get away from the humdrum, to discover and experience, but most of all a chance to build a shared memory.

Futuroscope Theme Park France is different; its difference lies in the variety and originality of the experiences it offers its visitors, in the combination of modernity and humanity, the perfect balance between thrills and discovery that are available at every stage of the visit, the joy it brings to people of all ages, but especially in the warmth of its welcome and the special bond it maintains with its visitors. Here you can act the star, test your physical prowess, stimulate the talents of your imagination, play the same games as your kids, jump into the 3D experience and explore new horizons, boogie with a giant robot, enjoy the magic of a live show together, taste the cuisine of the future, walk on the ceiling and into a world of illusion, see contemporary art in the open air, and, from April, go on a safari into the future thanks to the revolutionary technology of augmented reality…

Futuroscope Theme Park France brings you more than 30 distinctive and amazing, immersive and hands-on experiences that let you play, explore, dream and excel.