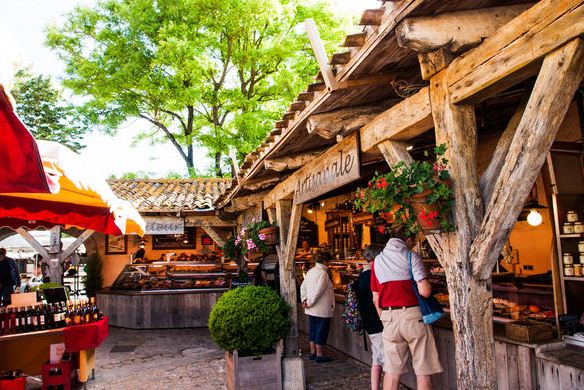 La Flotte-en-Re is a fishing village located on the northern and western side of the Ile de Re, off the Atlantic coast of La Rochelle.  The commune covers an area of 12.32km2.  The island is accessible via a 3km toll bridge (cost from 9 euro to 16.50 return), and the D735 is the main road that runs through it.  Ile de Re can still be reached by boat, with the company Inter-Iles from the old port in La Rochelle, and also from a new facility (2008) at La Tranche Sur Mer (Vendee).  Timetables can vary in both days and times of travel depending on the season.  From La Rochelle, there are motorways towards Niort (N11) and Rochefort (N137).  There is no rail link from the island, but La Rochelle does provide access to both regional rail (TER) and the TGV, which links with Paris (Montparnasse) in a shade over 3 hours.  The nearest airport is La Rochelle, and this offers flights to a variety of UK destinations with the major budget carriers.

The climate here is mild courtesy of the position of the village on the Atlantic coast.  This has the effect of keeping summer temperatures warm (but not excessively hot) whilst keeping winters mild.  Average summer temperatures are between 22C and 24C (14C to 17C night), and in winter this drops to 9C to 10C (4C to 5C night).  Spring and Autumn can be warm with May averaging 19C (12C), and September 22C (14C).  Wettest months are Oct and Nov with 65mm and 62mm respectively, and the driest months are June and Aug with 24mm and 29mm respectively.  This part of Charente Maritime receives over 2000 hours of sunshine per year.

Tourism In La Flotte en Re, Ile de Re France

La Flotte en Re is listed as one of the most beautiful villages in France (Les plus beaux villages de France).  It developed alongside the site of the Chateau des Mauleons, which was subsequently destroyed during the wars of religion in 1575.  The chapel from the chateau was developed into what is now the St Catherine Church, with its large bell tower.  The village was once a deep-water port for the trade of salt, vinegar, wines, and spirits.  The existing landing port was built in the 18th Century.

The architecture of interest includes the remains of the 12th Century Chateliers Abbey (the oldest on Re), and the partially restored Fort de la Pree, built with stone from the Abbey to fend off the English and the Protestants.  The village has a Museum of Ecology the Maison du Platin, which has four levels and affords panoramic views over the bay of La Flotte.

Activities around La Flotte include catamaran sailing, horse and pony trekking, tennis, golf, and the opportunity to explore the island on a bicycle, the islands transport of choice.    There are 3 campsites all within close reach of the village amenities and the beach, and there are a number of restaurants and hotels in the vicinity, notably the four-star Richelieu Hotel, with its Michelin starred restaurant and Thalassotherapy center.  There is also a pretty indoor market, with a paved courtyard and surrounding market halls.  Much of the village is pedestrianized.

La Flotte is part of the La Rochelle economic zone which has an unemployment rate of 9.8%, compared against the regional rate of 8.6% and the national rate of 9.1% (INSEE 2006).

Education In La Flotte en Re, Ile de Re France

Key Facilities and Services In La Flotte en Re, Ile de Re France