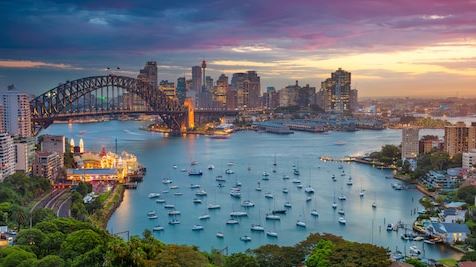 Sydney is the most emblematic city to see in Australia even if it is not the capital. It was the first point of arrival for Europeans and many years later, in 2000, it became known to the world by hosting the Olympic Games. These are some of the events that have left their imprint on the beautiful city … If you want to know more about it, we’ll tell you Some Interesting Facts About Sydney Australia.

Australia is one of the most recent countries to be added to the world map. Having been founded as a nation only in 1901. However, Sydney was the first European settlement even many years before that, in 1788. A very short time later they arrived in Hobart, the capital of Tasmania. Still, not everything in Australia is this recent.

It is considered the oldest territory and, based on radiocarbon dating, Sydney is believed to have been inhabited by indigenous people in about 30,000 BCE.

It’s hard to imagine another name for Sydney, but it was originally called New Albion, referring to the poetic name for Great Britain. But Captain Arthur Philip renamed it in honor of the then English Home Secretary, Lord Sydney, who permitted him to establish the colony.

Its original name is still important in the city since in Albion Street you can find a lot of historical buildings to remember its beginnings. Without a doubt, one of the best Unkown Facts about Sydney Australia.

The Harbor Bridge is also affectionately known as “The Coathanger”  for its characteristic arched shape. It is the largest steel bridge in the world. When its construction was planned, more than 800 families had to leave their homes to leave enough space for the massive project.

If you think the Sydney Opera is huge, imagine how impressive the 3,770 feet high bridge …

When the Harbor Bridge was to be inaugurated in 1932, a man in a military uniform broke into the ceremony. Before the ribbon was symbolically cut by the Prime Minister of New South Wales, this intruder did so on horseback with a sword. Logically, he was arrested by the police.

One of the curiosities of Sydney is the name of this beach, perhaps that’s why it became the most famous after Bondi The famous Manly Beach is named so as the founder of the city Capt. Arthur Phillip was impressed by the manly behavior of the indigenous inhabitants.

In 1991 the 1 and 2 cent coins were withdrawn from circulation, but nine years later they became very valuable. They were fused to make the bronze medals for the 2000 Olympics. Now, they are the world’s most precious cents.

This is the name of the only successful coup. At the beginning of the Sydney colony, rum was a very common form of payment, so when the governor banned it in 1808, the leaders of the rum trade plotted a coup to remove it from power.

The Sydney spider has longer fangs than many snakes and its bite causes death in less than 15 minutes. It is called a Sydney funnel-web spider but the truth is that it can be found all over the east coast of Australia, so watch out for them!

The Homebush Bay area was remodeled for the Olympics. It was one of the most polluted parts of Sydney from industrial waste and rust from the dozens of abandoned ships on the Parramatta River.

Most of the boats were withdrawn, but the SS Ayrfield was left with a completely rusted deck to host a floating forest. The 102-Year-Old Abandoned ship where even seagulls board in the breeding season.

In 2010, four men tried to go from London to Sydney by jet ski. Nothing more and nothing less than 31,000km … Against all odds, they managed to reach Greece, where their vehicles sank due to a storm in the Mediterranean. The Greek coast guard had to intervene in their rescue. This is undoubtedly one of the craziest facts about Sydney Australia.

Like the London Necropolis Railway, Sydney had its own “funeral” rail network. Trains carried the coffins and relatives of the deceased from Mortuary Station (near present-day Central Station) to Rookwood Cemetery. The trip occurred in 1867 when the city’s cemeteries were already full. The Sydney Opera House is one of the most famous landmarks in the world. Surely, when you think of Australia, or more specifically Sydney, this spectacular work of art comes to mind. Declared a World Heritage Site by UNESCO in 2007 , it is the main attraction of the city, the largest in Australia.

In the late 1940s, Sydney wanted to be a world-class city, but intellectuals thought it was not a pioneer in culture . Among other things, this city lacked a stage to host large theatrical performances, including works of classical music.

It is made up of three different buildings that give the impression of being one. About 10,000 workers participated in its construction. It was opened by Queen Elizabeth II on October 20, 1973, months after the completion of the work

Apart from having a great story, it also hides many curious facts. Next, we will tell you some interesting Facts About Australia Sydney Opera House so that you can learn more about one of the most photographed buildings in the world. We also give you useful information to visit the opera.

The glass used in the construction of the building is unique to the Sydney Opera House and comes from France. It was commissioned by the builders and tailor-made for the occasion, so there is no other building in the world using it.

The building ended up costing almost 15 times more than expected. This was one of the main reasons why the work stopped for a while. Finally, the cost of the construction was 102 million Australian dollars, instead of the 7 million that they had planned to spend.

On the ground on which the Sydney Opera House stands there once was a well-known fort, located in the same strategic position on Sydney Harbor.

The Sydney Opera House is 187 meters long and 115 meters wide, much larger than the size of a football field. It sits on 5,798 hectares of land, a space enough for 8 Boeing 747 models to fit from wing to wing.

The great organ in the Opera House took more than 10 years to get built. Today, it is the largest mechanical music instrument in the world with 10,154 pipes.

Despite having six halls to host shows, the largest and best known is the concert hall, which contains 2,679 seats. Not only art is shown, but it also has a very prestigious recording studio for musicians and filmmakers inside the opera.

For maintenance tasks, 15,500 light bulbs are changed annually at the Sydney Opera House.

The first person to perform at the Sydney Opera House was Paul Robeson and he did so despite not being finished. It happened in 1960 when Ol ‘Man River sang to construction workers over lunch.

In the 1980s a chicken fell on the head of an orchestra musician while he was performing at the Opera House. A net was later installed over the musicians so that another accident like this would not happen again.

Long enough to go from Sydney to Canberra or from Barcelona to Saragossa.

Danish Jørn Utzon won the competition to design the building despite never having been to Sydney. But he had a great advantage: a former naval experience that helped him study the shape of the port and the location of the Opera.

Three judges rejected Utzon’s design in the competition, but the prestigious American architect Eero Saarinen was also part of the jury and convinced the rest that Utzon had to be chosen ahead of 232 other projects. The winner was awarded a modest £ 5000 as a prize.

Jørn Utzon is believed to have been inspired by the opera’s arched ceiling design while he was peeling an orange. There are other sources that say that the Danish architect was also inspired by snails, palm leaves and Mayan temples.

Utzon was an architectural genius, but he never saw any of his seven works completed , including the Sydney Opera House. A change of government in New South Wales caused the funding to stop. The Dane had to leave Australia in 1966 and never returned. However, his work will be remembered for eternity.

The largest concert ever held at the Sydney Opera House in terms of attendance was by the Crowded House band in 1996. It is estimated that there were around 250,000 people.

It was a very controversial and surprising contest, since the actor decided to appear the day before the event when he was supposed to have already left the bodybuilding profession.