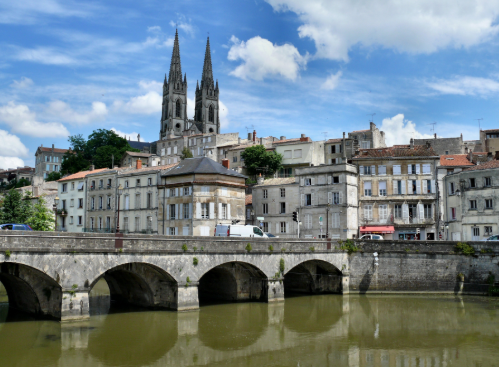 Niort is the capital city of the department of Deux Sevres.  It is located in the southeastern corner of the department, towards the border with Vendee (Pays de la Loire) and the Charente Maritime.

The A10 Motorway passes the City to the south and west, carrying traffic between Saintes (81km) and Poitiers (75km).  The A83 passes by the north of the town, towards Nantes (144km), and the N11 takes traffic west to La Rochelle (64km).

The city is on the TGV mainline, and this can have you in Paris (Montparnasse) in around 2h20mins.  The nearest commercial airport is La Rochelle (64km).  The town (68.2km2) stands on the left bank of the Sevre Niortaise River, on the slopes of two hills facing one another (altitude 2m-77m).

The climate in Deux Sevres France

Wettest months are Oct, Nov, and Dec (94mm), whilst June is the driest month with 39mm.  Niort is within an area that receives over 2000 hours of sunshine per year.

Niort is probably most famous for its Donjon (Dungeon) with twin keeps that was built in 1158 by Henry II Plantagenet to protect his wife Eleanor of Aquitaine.  The building now houses a museum, and one of the towers has an observation point for visitors.

The old quarter is set on the hill St Andre and is home to the 11th century St Andre Church, a Neo-Gothic structure completely rebuilt in the 19th century.  This area is also home to the ‘Pilori’, a miniature version of the Dungeon and built-in 16thcentury Renaissance style, formerly used as the town hall, but now used for art exhibitions.  The Notre Dame church (15-16 century) sits on the other hill of Niort, built in Gothic style its spire is the tallest structure in Deux Sevres at 75m.

The city is situated to the eastern boundary of the vast Marais Poitevin (marches), that extend into Vendee and Charente Maritime.  This network of 4000km network of canals is known as Green Venice (Venice Vert), and visitors can take a trip on a traditional Barque (flat bottomed boat) through an outstanding area of flora and fauna.

Linking the town with the Marais Poitevin is the Coulee Vert, a picturesque walking and cycling route that is also popular for fishing.  In 2000 the town constructed the ‘Communal path of the 3rd Millenium’, a walking and cycle path around the city, with 9 different possible routes, and 53km of paths in total.

As you’d expect for a town like Niort, there are many events and exhibitions throughout the year, with a constantly changing agenda.  Annual events include ‘Braderie’, the commercial event of the year, which is a street stock sale, the Tour ULM de France (August) is a microlite aircraft event departing and returning to Niort after completing 3000km in 7 days, and the ‘Rallye des 12 Traxaux d’Hercule’ is a 2-day car rally held in August.

The main cultural centers of Niort are the Moulin du Roc, the Donjon, and the Agesci Museum.  The Moulin is a National Theatre and hosts a varied agenda covering theatre, song, music, and dance, and it also houses a large media center and library.  The Agesci Museum and Donjon display their own works of art as well as temporary exhibitions.

Niort is very focussed on sports, and there are many facilities here.  The towns football team Chamois Niortais FC play in the second tier of French football, and the Rugby team Stade Niortais will be playing in the top league from 2008/9.  There is a successful horse-riding club here, and the Hippodrome de Niort-Romagne is a racetrack with events throughout the year.  Adjacent to the racetrack is an 18 hole Golf Club and Golf school.  The former airbase at Souche now hosts a flying club, with gliding, hang-gliding, microlites and model planes all on offer.

Niort is part of the Sud Deux Sevres economic zone, which has an unemployment rate of 7.1%, compared against the regional rate of 8.6% and the national rate of 9.1% (INSEE 2006).  The town is renowned as a centre for Mutual Insurance and Risk Management, with many of the major French companies sited here.  A university institution here specialises in the subject (part of Poitiers University). Know Niort Deux Sevres France better than we do?  Leave a comment below.