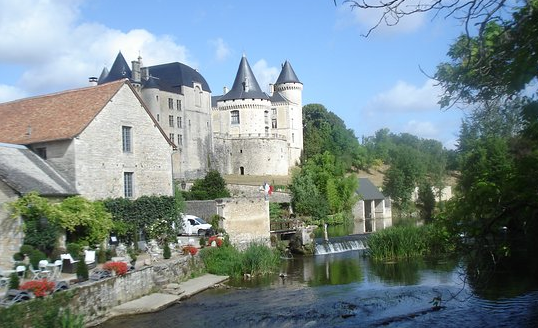 Villefagnan is a small village (Commune area 23.65km2) situated 10km west of Ruffec in the northern Charente Department (Alt 88m to 158m).  Ruffec provides access to effective road and rail options, with the RN10 Motorway (Angouleme-Poitiers) by-passing the town, and the TGV providing high-speed access to Paris, Lille/Brussels, and Bordeaux.  It is possible to reach Paris from Ruffec in 2h20m using the TGV.

The Weather In Villefagnan France

The climate here is temperate, with typically cool winters and warm (sometimes hot summers).  Villefagnan receives around 1900 hours of sunshine per year.  The warmest months are June, July, and August with 24C to 27C (13C/15C low), but May, September and October temperatures also range between 18C and 23C.

A typical Charentais village, Villefagnan has a medieval church, limestone buildings, and is surrounded by countryside.   The Trois Fontaines Lake nearby has a beach and offers bathing, boating, a children’s play area, and fishing.  Other sites to see include the Conservatory of Rural Art and the site of the Pierres Blanches Windmill, re-creating the activities of a 19th-century mill.

The village has a tennis court, football and rugby facilities, and a riding school.  Canoeing is available at nearby at the free Rejallant Leisure Base in Condac (12km), where there is also a small beach, play area, barbecue facilities and a restaurant overlooking the water.

The economy here is centered around agriculture. The village is part of the Haute Charente economic zone, which has an unemployment rate of 7%, compared against the regional rate of 8.6% and the national rate of 9.1% (INSEE 2006).

There is a choice of one state and one private Nursery/Primary school, and there is one High School.  For Colleges (Lycee) nearby Ruffec (10km) provides options.