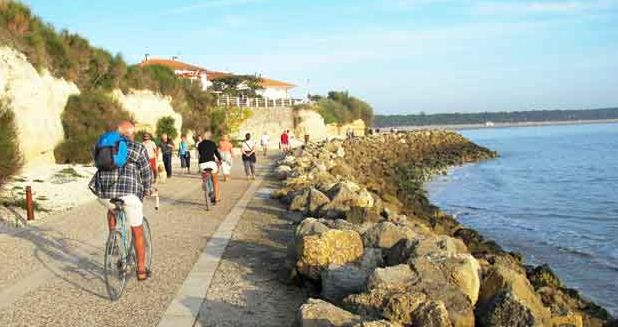 St Georges de Didonne is a seaside town situated just 5km from the major tourist destination of Royan, situated at the mouth of the Gironde Estuary, on the Atlantic Coast of Charente Maritime.  The commune covers an area of 10.58km2.  The RN150 enables access north to Saintes (37km/40mins) and the A10 motorway, and the D730 takes traffic south and east towards Mirambeau.  La Rochelle is the nearest airport offering flights to the UK through a number of budget airlines.  Royan is linked to the TER regional rail network.

The location on the Atlantic coast means that the climate is temperate all year round, with warm (but not excessively hot) summers, and cool (but not extremely cold) winters.  Spring and early Autumn can be warm.  In summer, daytime temperatures average 24C to 27C (13C to 15C night), and in winter this drops to 9C to 11C (3C to 4C).  Wettest months are October and November (57mm to 59mm), and the driest are March, July, and August (32mm).  St Georges de Didonne is within an area that receives over 2000 hours of sunshine per year. Originally a small fishing village, the town only really opened up to tourism in 1920 but was affected by the allied bombings at Royan at the end of WWII.  St Georges de Didonne has a 2km beach, at the end of which is sited the Parc de l’Estuaire, offering an interactive museum, forest walks, and educational tours.  The town has its own 36m tall lighthouse which overlooks the small port.

The lighthouse is open from June to Sept and offers excellent views of the Charentaise coastline.  The Eglise de St Georges was originally constructed in the 12th century, but most of the structure that exists now dates back to the 19th century.

There are ruins of the 16th-century fortifications at the Pointe de Vallieres, which separates the Conche at Royan from St Georges.  The proximity of St Georges de Didonne to Royan provides many tourist and leisure activities, and at St Georges, there is windsurfing, catamarans and dinghy sailing. Every year in August the town hosts ‘Festival Humour et Eau Salee’ (Festival of Humour and Salty Water), with comedy shows, street shows at various venues around the center of the town.  The illustrious ‘Prix Isnogoud’ is awarded to a media personality for the most beautiful flop of the year.  In June there is ‘Musiques et Gastronomie du Monde’, a music and culture festival with films, shows, music, and cuisine.  There are campsites and holiday parks located in and around the Forest de Suzay nearby.

The local economy is driven by tourism, with the local population increasing ten-fold during the summer season.  Saint Georges de Didonne is part of the Saintonge Maritime economic zone which has an unemployment rate of 11.4%, compared against the regional rate of 8.6% and the national rate of 9.1% (INSEE 2006).

St Georges de Didonne has most facilities you would expect in a town of this size, including supermarkets, restaurants, and cafes.  The closest public swimming pool is in Royan (5km)

There is a state nursery, and 2 primary schools in the town, but for secondary schools and colleges, Royan is 5km away.