Poitiers Region in France, In The Beautiful French Vienne 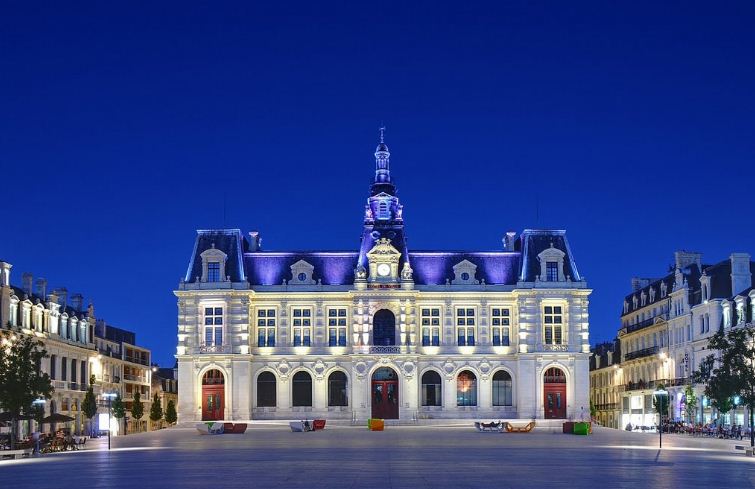 Poitiers is both the administrative capital of the Poitou Charentes Region and the Vienne department, covering a communal area of 42km2 and at an altitude of 65m to 144m.  As you’d expect, Poitiers has all of the transport links you would expect for a town this size.  The A10 motorway passes the town, linking it with Saintes in the south (140km) and with Tours in the north (102km).

Other major routes are the N147 (Limoges -128km), the N149 (Parthenay – 52km), and the RN10 to Angouleme(115km).  The town has a large railway station (Poitiers Gare), which has TGV, TER, and other SNCF services.  Poitiers is a stop on two TGV lines, La Rochelle to Paris Montparnasse (1h40mins), and Bordeaux to Paris Charles de Gaulle Airport (2h20mins).

To the west of the town is Poitiers Biard airport, offering services to the UK (reduced in winter), as well as holiday charter flights during the summer.  The River Clain passes through the town, and the River Boivre also passes close-by.
See also:  St Benoit, Jaunay Clan

The climate in Poitiers is driven by the Atlantic Ocean.  Average summer temperatures are between 23C and 26C (11C to 13C low), and in winter this drops to 8C to 9C (2C to 3C low).

The wettest month is normally October with 54mm, and the driest is March with 26mm.  Poitiers is part of a zone that receives over 2000 hours of sunshine per year. Tourism In Poitiers Region in France

Poitiers is a historic town that has many impressive buildings and monuments.  The most important is the Eglise St Hilaire le Grand, a 12th-century church, a stopping-off point for pilgrims on the way to Santiago de Compostela, the site is listed on the UNESCO World Heritage List.  The Notre Dame de la Grande is also a 12th-century church, situated opposite the tourism office in the center of town, with its detailed Romanesque facade.

Each night during summer the Polychromies lights up the facade of the church with accompanying music after sunset.  The Baptistere St Jeanis claimed to be the oldest Christian building in France (circa 360AD), and nearby to this is the Gothic Cathedrale St Pierre.

Le Musee Saint Croix exhibits archaeological artifacts, and the Musee Rupert de Chievres hosts a collection of ornaments and furniture from the 17th to 19th century and a collection of 16th and 17th-century paintings.

The town has set out three separate tours to help visitors see the key sites, these are marked out be colored lines painted on the streets.  Each route takes around 1h30mins, the blue, yellow and red tours take you on an often hilly but interesting tour of the town.  There are numerous parks and gardens in and around Poitiers, such as the Jardin aux Insectes, Jardin des Sens, and the Parc Floral de la Roseraie, with 465 varieties of roses.

The Parc de Blossac is a 9ha 18th-century park, with landscaped gardens, grotto, a small zoo, and rock garden.  There are botanical and rose gardens, and play areas for the children.  At Biard, the Grottes de la Noree is the only natural caves open to the public in the Vienne department, with 150m of chambers to explore.  The site is an important refuge for bats.  The town has a huge program of social and cultural events throughout the year.

Nearby at Jaunay Clan, is the hi-tech Parc Futuroscope, the regions flagship attraction exploring the possibilities of multi-media and the moving image.

Poitiers is a young and vibrant university town and has a huge range of restaurants, cafes, and bars, with excellent shopping facilities both in the town center and the surrounding areas, where there are a number of malls and industrial parks.

There are many sporting facilities here, with the Rugby, Handball and Volleyball teams playing at a high level.  There are good facilities for tennis, and the Centre Aquatique de la Pepiniere has a number of pools, spas, waterfalls, and a 76m water slide.  The population of greater Poitiers is around 120,000, and there are further facilities all around the town itself.  There is an ice rink, ten pin bowling, and a golf course along at Mignaloux Beauvoir.  Along at St Cyr is a large leisure lake with water sports.

Poitiers has a huge University Hospital (CHU) and has recently invested in a new Biopole, new facilities and support networks aimed at supporting biotechnology research, and helping bio-entrepreneurs in developing companies in cutting edge areas of science.

Poitiers is part of the economic zone with the same name which has an unemployment rate of 7.9%, compared against the regional rate of 8.6% and the national rate of 9.1% (INSEE 2006).

Whilst the University Hospital and the regional and departmental administration are easily the biggest employers in the town, biggest companies include Rocade Distribution (Leclerc) with 455 employees, Sorgieres (electric and gas) with 331 employees, SCAP (Chrysler and Peugeot) with 296 employees, and SEFI (industrial supplier) with 241 employees.

The town also hosts the University of Poitiers France, established in 1431, and at the heart of higher education in Poitou Charentes. Key Facilities and Services In Poitiers Region in France