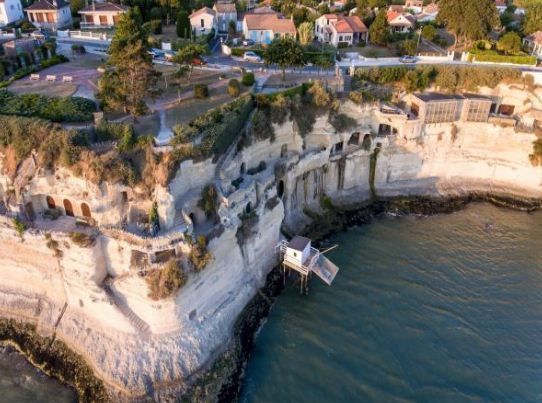 Meschers sur Gironde is a small seaside town situated on the Gironde Estuary, to the south east of both Royan and St Georges de Didonne.  The commune covers an area of 15.98km2.  The D25 links the town with St Georges, and the D145 links with the beautiful village of Talmont sur Gironde.  The nearest rail link is at Royan (11km) for TER regional services.  The nearest commercial airport offering flights to the UK is La Rochelle (88km).

The proximity to the Atlantic coast means that the climate is temperate all year round, with warm (but not excessively hot) summers, and cool (but not extremely cold) winters.  Spring and early Autumn can be warm.  In summer, daytime temperatures average 24C to 27C (13C to 15C night), and in winter this drops to 9C to 11C (3C to 4C).  Wettest months are October and November (57mm to 59mm), and the driest are March, July, and August (32mm).  Meschers sur Gironde is within an area that receives over 2000 hours of sunshine per year.

Meschers is probably best known for its troglodyte caves, which in the past is said to have provided shelter for sailors, and during the wars of religion, to Protestants.  Guided visits are available, and there is a program of activities.  The Grotte Matata and the Grottes de Regulus also afford visitors a fine view of the Gironde Estuary, the largest in Western Europe.  The town has a fine sandy beach (Conche des Nonnes), and there are many other beaches to choose from at both nearby St Georges ded Didonne, and Royan.

Meschers sur Gironde is part of the Saintonge Maritime economic zone which has an unemployment rate of 11.4%, compared against the regional rate of 8.6% and the national rate of 9.1% (INSEE 2006).

You will find most amenities in Meschers sur Gironde including a supermarket and restaurants, the nearest swimming pool is in Royan (11km)

There is 1 state nursery, 1 state primary school, for secondary schools and college (Lycee) the nearest facilities are at Royan 11km.