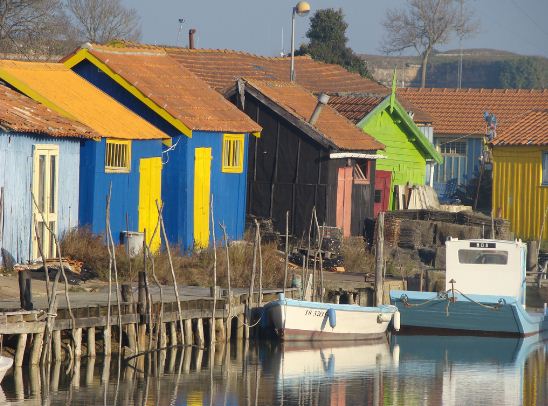 The Ile d’Oleron is the second largest island of France (behind Corsica), and is situated off the Atlantic coast of Charente Maritime.  Access to the island is via a 3km toll-free viaduct built in 1966.  There are options to get to Oleron by boat with Inter-Iles, who depart from La Rochelle to both Boyardville and St Denis via the Ile d’Aix.  The main access road to the island is the D728 via Marennes, and then over the 3km (toll-free) viaduct built in 1966.  The D728 links the island with Saintes (63km) and this gives access to the A10 motorway and other main routes.  There are no main rail links here, and the nearest access to the regional railway is at Saujon (49km).  The nearest commercial airport offering flights to the UK is La Rochelle.

The Islands position off the Atlantic coast means that summers are warm (but not too hot) and winters are temperate.  Average summer temperatures are between 20C and 23C (15C to 17C low), and in winter this drops to 9C to 10C (6C to 7C low).  Wettest month is November with an average of 62mm, and the driest periods are Mar, Jun, and Aug (23mm to 25mm).  Oleron is within the sunniest part of the Atlantic coast, with over 2000 hours of sunshine per year.

Oleron is 30km long and 10km at its widest point and covers an area of 175km2.  On the Atlantic facing coasts are pine forest and dune-backed surfing beaches, with La Grande Plage beach offering 12km of sandy beach towards the south.  On the continent-facing side is the Pertuis d’Antioche separating the island from the Ile de Re in the north, and housing the Ile d’Aix, Madame and Fort Boyard, as well as a large oyster farming industry.  The Bassin de Marennes-Oleron has 3000ha dedicated to the farming of oysters, and it produces 60% of the oysters in France.  Marennes-Oleron oysters are renowned the world over for their distinct flavor and green-tinged coloring.

Historically the island has been dominated by the English but has been in French hands since 1370.  Some of the islands were fortified during the 17th Century, in particular, the fortifications still intact at Le Chateau d’Oleron were developed with the aim of protecting the naval town of Rochefort from attack.  Oleron was amongst the last places liberated at the end of WWII, with the fortifications at Le Chateau being damaged during allied bombardments in 1945.  Nearby Fort Boyard was built as a part of the effort to fortify the entrance to the Charente estuary but ended up being used for a time as a prison, and currently to host the French TV show of the same name.

Like its neighbor the Ile de Re, l’Ile d’Oleron has a high proportion of properties that are classed as second homes (58%), underlining its popularity with affluent city dwellers as a place to own a holiday home.  The Pays  Marennes-Oleron was the most visited tourist area in the Charente Maritime in 2007, with almost two million nights spent in the number of hotels, gites and other ‘outdoors’ modes of accommodation.  It is the last category, including camping and mobile homes for example, that accommodated 90% of the overall number of visitors that year.

Most of the communities on the island are geared up to accommodate large numbers of tourists, with many well equipped camping sites and a range of hotels and gites to suit all budgets.