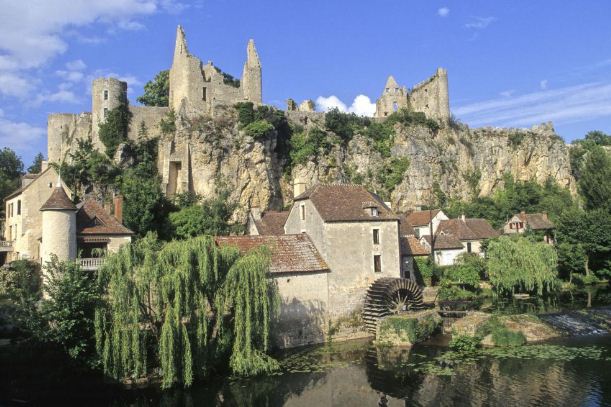 Angles sur l’Anglin is a small village located in the East of the Vienne department, close to the borders with Indre (36) and Indre et Loire (37).  The commune area of Angles sur l’Anglin extends to 14.75km2 at an altitude of 63m to 139m.  There are no major routes in the immediate vicinity, although the N151 from Poitiers and Chauvigny passes to the south of the village.  There is no rail link here, and the nearest is at Chatellerault (33km) where it is possible to connect with both the TGV and TER services.  The TGV can connect with Paris (Montparnasse) in 1h25mins.  The nearest commercial airport is Poitiers Biard (57km) with seasonal services to the UK, but Tours airport is also an option at 108km.

The climate here is maritime, and therefore temperate with clearly defined seasons.  Average Summer temperatures are between 23C to 26C (12C-15C night), and in Winter this drops to 7C to 8C (2C to 3C night).  Wettest month is October with 53mm, and the driest month is March with 28mm.  Angles sur l’Anglin is within an area that receives between 1750 and 2000 hours of sunshine per year.

Angles sur l’Anglin is listed as one of the most beautiful villages of France (Les Plus Beaux Villages de France), and also achieved a 3 flower rating as part of the Ville Fleurie accreditation.  The village is renowned for its fortress, built in 1025 and sited 50m above the river on a cliff.  The fortress is a ruin and has been so since the 17thcentury, but it is now a protected monument although open to the public.  The trench pathway ‘La Tranchee des Anglais’ leads down the hill from the fortress to the St Pierre Church, a 12th-century structure affording superb views over the valley.  The village is full of interesting architecture, such as the 12th century St Croix Church on the opposite side of the river, and L’Arceau, an archway, and cellars previously used as salt warehouses, with Spanish ‘Sarragosse’ influenced design.

The village is now also famous for the discovery in 1948 of the Roc aux Sorciers.  This archaeological site houses a 20m long sculpted and painted artwork, estimated to be between 14-15,000 years old.  The site itself cannot be visited, but there is a Centre d’Interpretation which offers exhibitions, and two separate means of viewing the piece.  One a digital reproduction, and the other a molding of the work that people can touch.

There are a number of annual events held in the village, including Artisanales Medievale, a street festival held in July with musicians, dancers, and street animations.  In August there is the Pyromelodique Spectacle, with a funfair, evening entertainment and fireworks over the fortress.  Also in August is the Concours de Peche (annual fishing competition).  In June is the Guinguette Au Bord de l’Eau, an open-air Moules and Frites night with orchestra and dancing.

There are limited facilities in Angles sur l’Anglin, and the nearest supermarket is at nearby Yzeures sur Creuse (12km), where there is also a swimming pool and pharmacy.  The nearest doctors and dentists are at St Pierre de Malle (4km)

Angles sur l’Anglin is part of the Montmorillon economic zone, which has an unemployment rate of 6.7%, compared against the regional rate of 8.6% and the national rate of 9.1% (INSEE 2006).

Angles sur l’Anglin has a state primary school, but for nursery school, the nearest is at Marigny (11km).  The nearest secondary School (College) is at Tournon St Martin (8km), and the nearest College (Lycee) is at Le Blanc (18km).