Ile De Re in France Guide 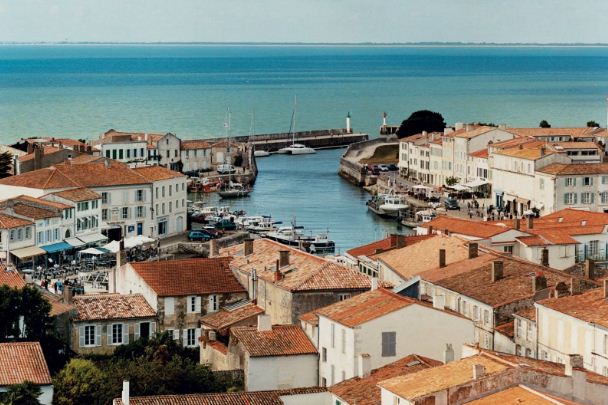 Ile De Re in France Guide

Ile De Re in France Description

The Ile de Re is situated off the Atlantic coast of Poitou Charentes, just 3km from La Rochelle.  The 3km road bridge that opened in 1988 links the Island with the mainland, and costs around 16.50 euro in peak season for a return trip.  Ile de Re can still be reached by boat, with the company Inter-Iles from the old port in La Rochelle, and also from a new facility (2008) at La Tranche Sur Mer (Vendee).  Timetables can vary in both days and times of travel depending on the season.  There is no rail link from the island, but La Rochelle provides easy access to both regional railway TER and the high-speed TGV which can have you in Paris (Montparnasse) in a shade over 3 hours.  La Rochelle also has a commercial airport that offers a wide variety of flights to the UK, and French cities.  In terms of road access, the N11 motorway connects La Rochelle with Niort to the East, and the N137 to Rochefort in the South.

The climate here is mild courtesy of the position of the island on the Atlantic coast.  This has the effect of keeping summer temperatures warm (but not excessively hot) whilst keeping winters mild.  Average summer temperatures are between 22C and 24C (14C to 17C night), and in winter this drops to 9C to 10C (4C to 5C night).  Spring and Autumn can be warm with May averaging 19C (12C), and September 22C (14C).  Wettest months are Oct and Nov with 65mm and 62mm respectively, and the driest months are June and Aug with 24mm and 29mm respectively.  This part of Charente Maritime receives in excess of 2000 hours of sunshine per year.

The island is popular with well-heeled Parisians and other city dwellers as a place to own a second home.  This is borne out by the fact that around 60% of properties here fall into this category.  Out of season, the population of the island is around 16,500, but during the tourist season, the population can swell to 200,000.  In 2007, there were around 1.5m nights spent in camping on the islands 48 campsites, and 0.25m nights spent in its 35 hotels (not to mention the holiday parks, bed, and breakfasts and other accommodation).  Whilst the preference for camping might be related to capacity and the fun and excitement of the outdoors, another factor could be that around half of the hotels here are 3 or 4 stars (with a tariff to match).

Enduring images of the Ile de Re are of Hollyhocks, whitewashed low-rise buildings with pastel green shutters, beaches and bicycles.  Strict planning controls have ensured that, despite the ‘opening-up’ of the island by the new road bridge, the island remains unspoiled.  The island has a land area of around 85km2 and is 30km long, and with its flat territory and maze of around 100km of cycle paths, most people choose to abandon their cars in favor of pedal power.

There is plenty of history here, the location of Re on the Atlantic coast has always left it vulnerable to attack, notably from the English, but the island has been fortified over the centuries.  Saint-Martin-de-Re is the capital and is famous for both its position as a port town on the north of the island and the fact that it is surrounded by star-shaped fortifications, designed by Louis XIV’s chief engineer Vauban in 1681.  This site along with 13 others around France, was added to the UNESCO World Heritage List in 2008. Other architecture includes the Fort de la Pree and the remains of the 12thCentury Chateliers Abbey, both at La Flotte en Re, which itself is listed as one of the most beautiful villages in France (Les plus beaux villages de France).

Most places here offer fine sandy beaches, watersports, and a fine selection of restaurants and cafes offering fresh local seafood.  The flat landscape and many cycle paths make it easy to get around and see the oyster farms, salt pans, historic buildings and monuments, pine forests, and to explore the different villages.  Try a ride on a ‘donkey in trousers’ at Saint Martin, visit the nature reserve at Lilleau des Niges, or try some Thalassotherapy at one of the 3 centers on the island.

Places on the  Ile De Re in France: