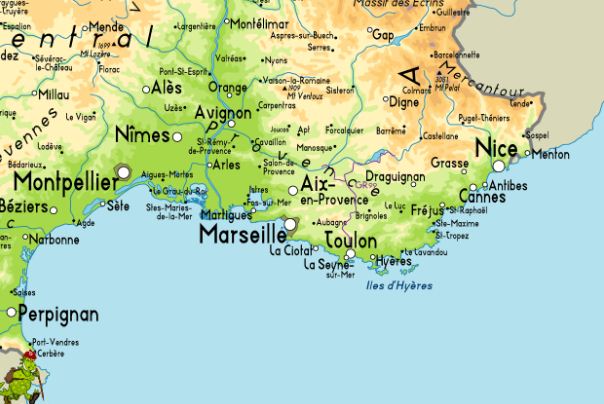 Often called “Paris of the South”, Montpellier is full of Haussmann architecture and many historical museums and art exhibitions. One of the largest cities in France, it also houses many cafes, bars, and restaurants.

Other highlights of the city include the impressive Gothic cathedral, the Arc de Triomphe of Montpellier in the form of the Porte du Peyrou and Chateau de Flagergues, a breathtaking beauty on the outskirts of the city. 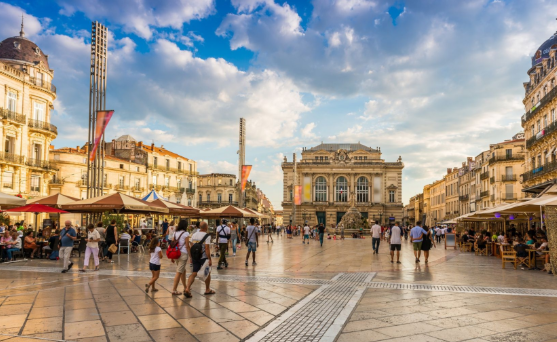 The Roman ruins of Arles are often considered as one of the best archaeological sites in the south of France or even the whole country. Featuring a two-story amphitheater founded in AD 90, the city has inspired countless writers and artists over the years, including the world-renowned painter Van Gogh.

The position of Arles at the edge of the Rhone also allows easy access to the Camargue region of France synonymous with grassy meadows, flamingos and wild horses. 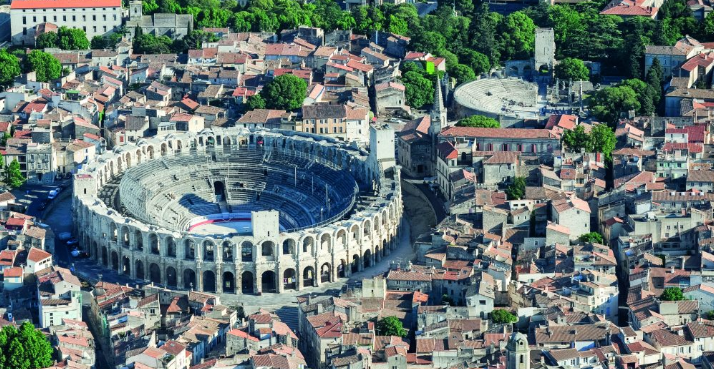 UNESCO World Heritage Site Les Écluses de Fonserannes, a series of nine stepped locks that link the Canal du Midi to other French waterways, Béziers is one of the oldest cities in France. In fact, it is only twenty years younger than the Provencal city of Marseille.

Today, the attractions of Béziers include walking in the many cobbled streets of the city, visiting the old walled city and exploring a side of France that many tourists never have the opportunity to discover. 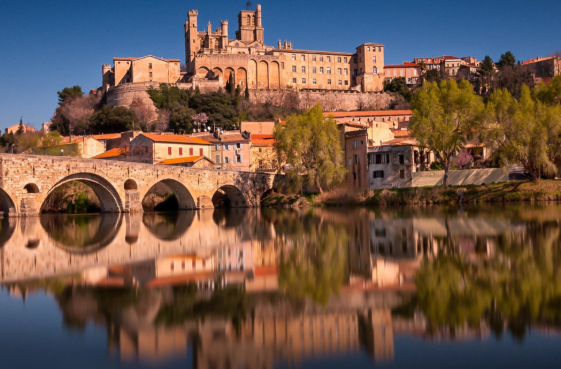 Birthplace of Henri Toulouse-Lautrec, Albi is the kind of city that we see on a vintage postcard. And the kind of place you could believe no longer exists.

Located in Occitania, this city was founded thousands of years ago and today houses a population of about seventy thousand inhabitants. Albi’s highlights include the 13th-century Gothic cathedral of Albi and the French gardens of the Berbie Museum. 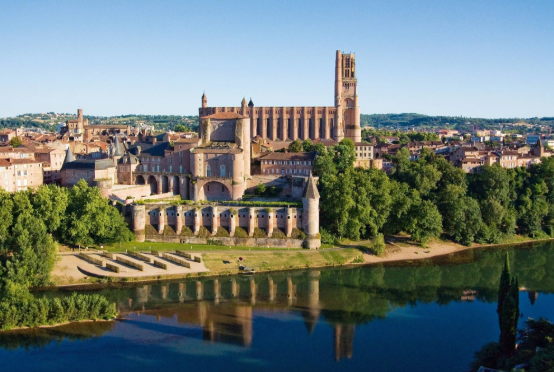 Formerly a Roman port city, the silt, and sand have grown so much over the years that the pretty town of Narbonne is today about fifteen kilometers from the sea.

Today, instead of a sandy beach You will find many paved alleyways, museums and the birthplace of the iconic French singer Charles Trenet if you choose to visit this beautiful city in the south of France. If you still want to enjoy the sea, sun, and sand, then take a day trip from Narbonne by bus to Narbonne-Sur-Plage. 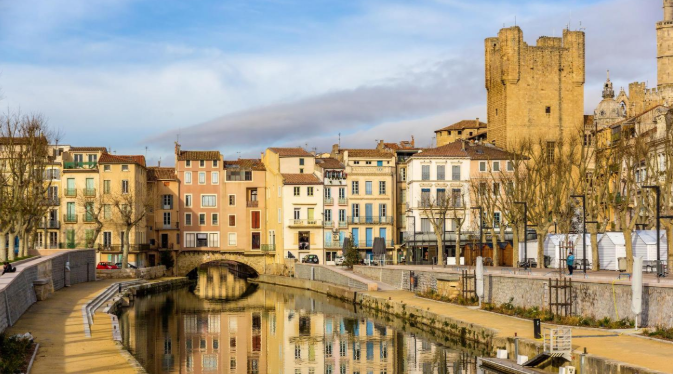 For adventures in the sunny seaside, you simply have to go to Biarritz, a seaside town on the French Basque coast. Located in the Pyrénées-Atlantiques, Biarritz is best known for its historic lighthouse and surf.

In fact, it is often called the “Surf Capital” for all of France. The beaches of the city are sandy and the cloud cover is minimal throughout the spring, summer and fall, making it an ideal destination for sun lovers.

One of the oldest cities in France is without a doubt Marseille, a city founded in 600 BC in antiquity. First known by the ancient Greeks as Μασσαλία (Massalía), Marseille is today the second-largest city in France after Paris.

The historic fishing town still functions as a working port and the highlights of the southern France destination include the Basilica of Our Lady of the Guard, as well as the ultramodern Museum of European and Mediterranean civilizations of the city. 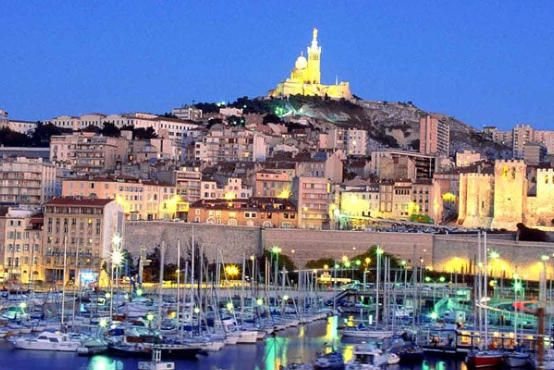 The city’s iconic bridge bears the name of a 12-year-old shepherd who lived in the Middle Ages. One day, Benezet would have heard a divine voice asking him to venture to Avignon so that he could build a bridge. The story says that’s exactly what he did and so the bridge is still standing today! 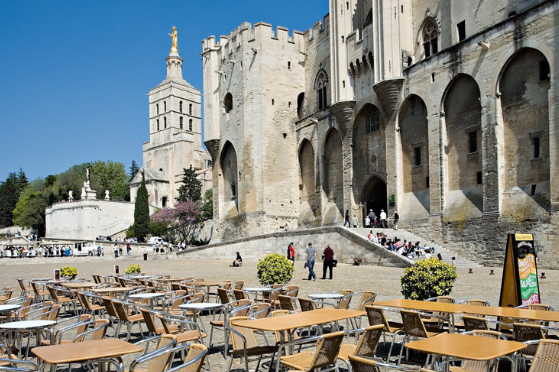 The word ‘cassis’ in French is not only the name for ‘cassis’ in the language but also the name of a pretty port city which is right next to the sea. To see absolutely during any trip in Provence, the highlights of Cassis include candy-colored houses, a Carolingian hotel and easy access to the now classified heritage site, the Calanques of Cassis.

READ  Moving to France from the UK, Honest Tips

If you want to taste the ‘real’ France, just enjoy a local ice cream (lavender is a must!) And walk around the city. Do not forget your camera, almost every corner is perfect! 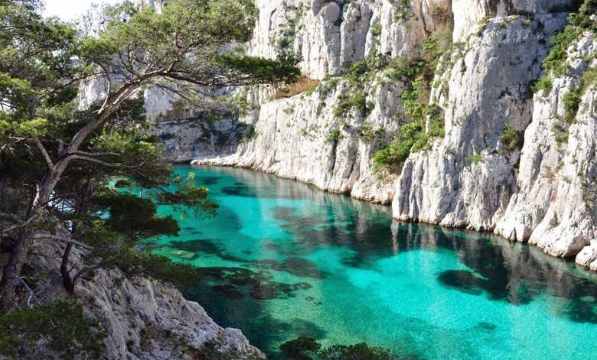 The fortified walls and a whole series of impressive structures come together to form a hilltop town that is emblematic throughout the world. Carcassonne was first founded as a fortified settlement in the Gallo-Roman era, then other additions to the city’s defenses were added during the Middle Ages.

If the medieval fortress was in a bad state in the 19th century (the financial constraints, lack of defense, etc. contributed to the collapse of the walls), the fortifications were strongly restored by the architect Viollet-le-Duc.

Today, Carcassonne is probably one of the most visited places in Occitania. Although there are certainly richer places to visit when it comes to the south of France, Carcassonne is worth a visit. 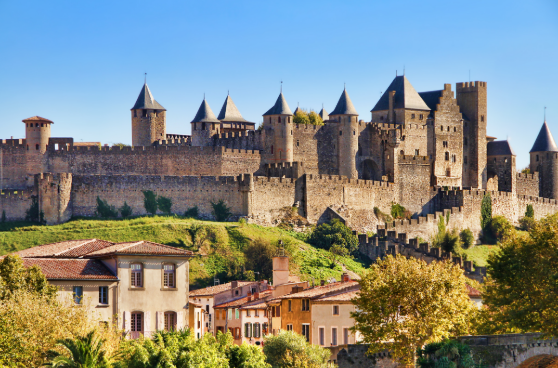 Hot stones, a hundred paved alleyways, and many fountains are the trademarks of Aix-en-Provence, a fairly important city that lies at the foot of the Montagne Sainte Victoire.

Home of the artist and impressionist Paul Cézanne, you can today follow in the footsteps of this famous French and even take your picture with a life-size statue of Cézanne in front of the tourist office! 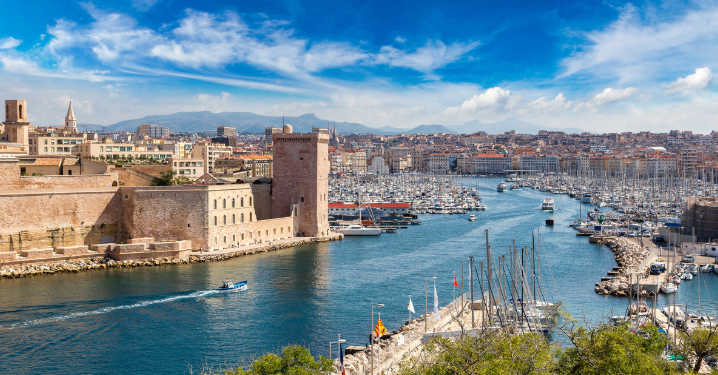 For a little sparkle and glamor, you do not have to look any further than Cannes, a breathtaking resort town along the glittering French Riviera.

Even if you are not really a beach person, you may have heard of this southern France destination thanks to its annual film festival, the Cannes Film Festival. And so, if you are a cinema enthusiast, then you simply have to head to this French destination! 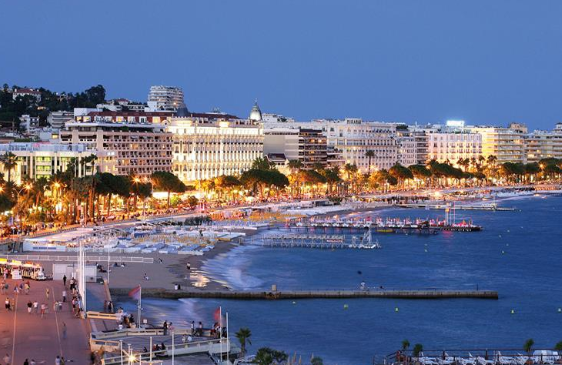 Small and located by the sea, the charm of La Ciotat lies in its authentic French atmosphere and its well preserved old town. Although there are few attractions in this Provençal town (several seafood restaurants and an artificial beach), La Ciotat’s main claim is that it is considered the cradle of pétanque, a ball game. similar to that of petanque. 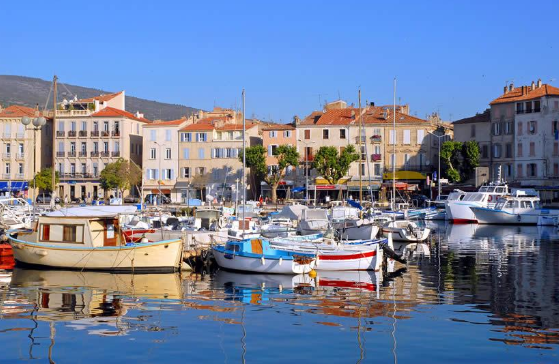 To visit preferably just before or just after the high season to enjoy the city without the crowds but with the best time possible, Antibes is located between the famous resort towns of Cannes and Nice.

Fort Carré, home to a particularly impressive museum dedicated to Picasso, the Fort Carré, shaped like a star of the sixteenth century, is a must-see in city in the southern french. 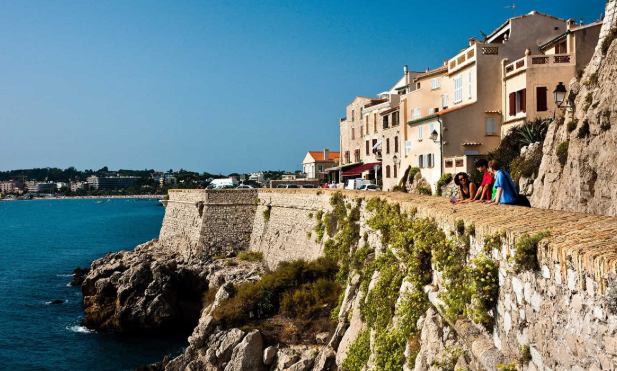 Stretching over 20 km of coast between Cassis and Marseille, the Massif des Calanques is a unique National Park in the world in that this terrain formed by rugged limestone that has been eroded by the sea, weather and salt breeze.

Small coves and impressive peaks make this promenade a must for hikers. If you choose to plan a visit, avoid the summer months because the park is often closed due to the risk of a forest fire! 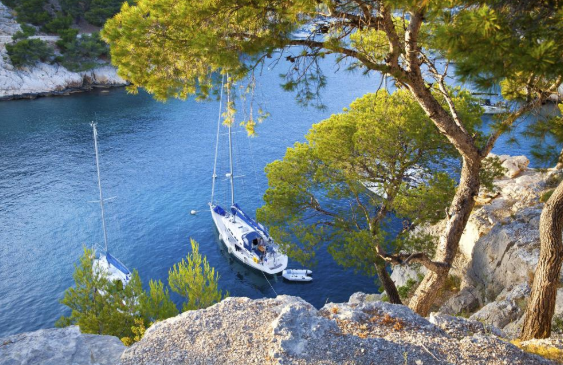 Of all the beautiful towns and villages of Provence, Saint-Paul-de-Vence is probably the most picturesque of all.

Characterized by its winding alleys, floral displays, and cobbled streets, this Provencal town is like a return to a vintage postcard! 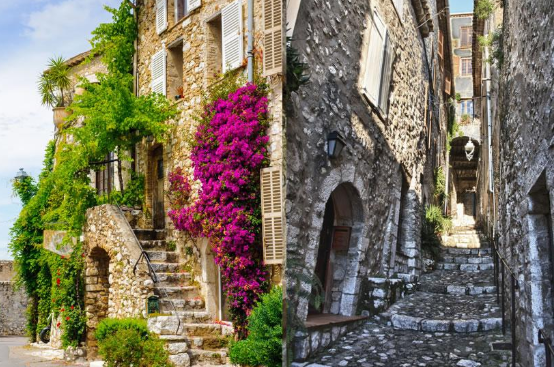 A fishing town that still functions today as a working port, Sète is located between the historic towns of Béziers and Montpellier. Easy to visit by day since Béziers, the region is well known for its dishes inspired by the sea, including mussels! 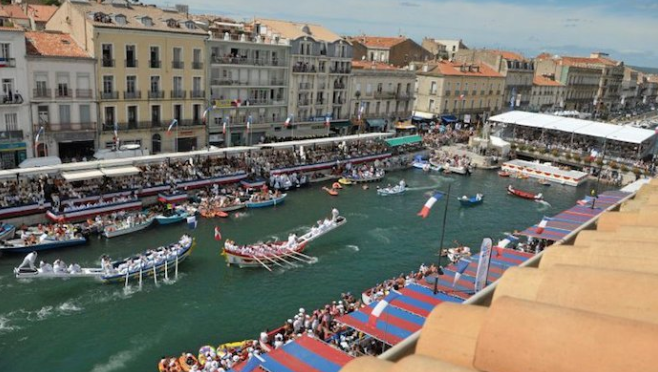 Nice, that’s satisfying … Nice is a breathtaking city along the Côte d’Azur. Especially known for its long boulevard along the sea named ‘Promenade des Anglais’, the city became a place for the rich and the wealthy when celebrities began flocking to the seaside resort during the 19th century.

Since then, it has appeared in countless paintings, films, and is well worth visiting if you are looking for a glittering getaway. 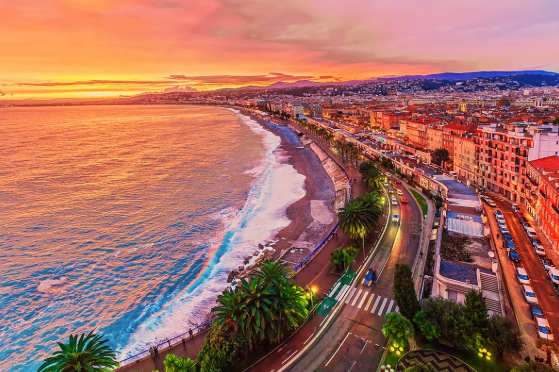 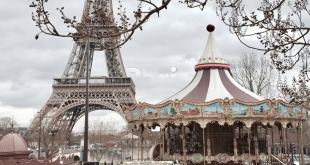 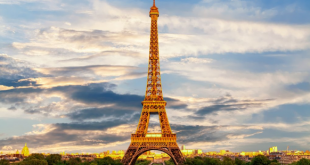 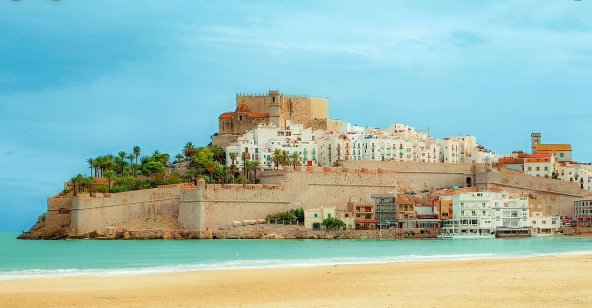 France Off The Beaten Path Tours – France is full of characteristics, authentic, ideal and …

16 Most Beautiful Towns In France

The Most Beautiful Towns In France – Growing up in France, I spent my childhood …